Norah known by her second name of Agnes loved the game of tennis and was very involved with the Country Women’s Association throughout her life. She was the Trustee and Secretary/Treasurer and later Chairman of the “Muttaburra and District Bursary Trust Fund” for the full 30 years of the Trusts duration. This trust helped 32 families in the district to send their children away in order to continue their education.

The following comments are extracted from a taped interview of Agnes in 1980 by the staff of the John Oxley University of Townsville.

When my father arrived in town he said “What a place, fancy living here.” He met my mother and they were married (her sister was horrified). They both worked at the hospital, my father as a wardsman looking after the Typhoid patients. He presence and gave great confidence. It was his wife Nora, who talked him into the hotel business.

On race weekends my parents would have 50 people staying at the “Exchange Hotel” and supplied meals for a least 100 people on the day.  In the early days we traded from 6am until 11pm. Each hotel would take it in turn to hold the Saturday night dances.

My parents would get goods from Bowen wagon and dray. They would have a wait of three months and quite often the goods were wet and damaged.

Before the hospital was built people would often travel by buggy half way along the track to meet the dray and be taken to Bowen for treatment.

In the early days we had five Chinese gardeners in the town. They would come around twice a week with fresh vegetables to the door. We had our own fowls, fresh meat every day and a baker next door. It is a lot different these days.

On her 100th birthday a special mass was held to commemorate the occasion, followed by a supper at the RSL Hall. Agnes was always very alert and, never lost any of her faculties right up to the end when she suffered a stroke during the night at home.  She was taken to the Aramac Hospital and five days later passed away only a few days before her 101st birthday. Neville recalls that Aunt Aggie often spoke about how funny it was that Tom’s name was Thomas William, but he was always called T.R. for Thomas Robert. (Note his signature on the opposite page). 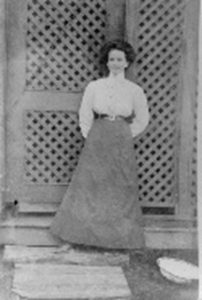 Muttaburra > Family Histories > Norah Agnes Hall nee McCarthy
The Muttaburra Community welcomes you to the home of the Muttaburrasaurus Langdoni. We hope you stay awhile and look around to learn about our past, present and future.